WHAT IS A BELT SQUAT MACHINE?

The belt squat machine, also referred to as a hip belt squat, is a tool which allows the user to squat safely, with the weight load being anchored to the hips as opposed to on their backs and they are ideal if you want to limit any stress on your upper body.

The original belt squat machine was invented by Louie Simmons of Westside Barbell back in 1975.  His invention came about following on from a serious back injury whereby Louie had to devise alternative methods to allow him to squat safely.

As belt squats have gained popularity over the last few years, many other machines have entered the marketplace with various differences.  We’ll talk more about them below.

WHAT ARE THE BENEFITS OF USING A BELT SQUAT MACHINE?

The primary benefit of the belt squat machine is that you can load up with weight and squat effectively, whilst keeping that load to a bare minimum on your spine.  This makes it the perfect machine for those who suffer from any upper body issues or pain but don’t want to forgo squats.

Another key benefit of using the belt squat machine is that it is encourages proper form.  A regular barbell squat is not an easy compound movement to perform and if done incorrectly can result in pain and injury to your hips, knees and back and it’s likely you won’t even be hitting the muscles you should be targeting.

However, if you want to improve your squat technique or you happen to be a squatting novice, this is where the belt squat machine can assist.  Due to the location of the weight load (from the hips) belt squats can assist with correcting pelvic tilt and straightening up of your spine, thus forcing you to adopt the absolute best position for squatting.  By improving your form on the machine you’ll be able to move over to barbell squats and undertake them with confidence.

WHAT MUSCLES DOES THE BELT SQUAT WORK?

Belt squats will target pretty much the same muscles as barbell squats, those being your hamstrings and quadriceps and to a lesser degree your glutes and trunk stabilisation muscles.

Because it helps to keep that weight of the glutes and core, belt squatting is excellent to build bigger legs.

If you’re a diehard barbell squatting fan who regularly squats with heavy weight, it can still be beneficial to incorporate belt squatting.  Regular barbell squats result in compression of the spine, whilst our bodies have adapted to tolerate this, the heavier the weight you are squatting the more compression will occur.  This means that your body will need longer to recover before you can return to a heavy squat session.

However, by incorporating belt squatting any spinal compression is reduced, if not removed entirely, meaning your recovery will be far quicker allowing you to undertake squats much sooner than would be possible with barbell squats.  This means you should see results with muscle strength and size much sooner.

WHAT EXERCISES CAN YOU PERFORM USING A BELT SQUAT MACHINE?

The belt squat machine is actually very versatile and a number of exercises can be performed on them aside from regular squats.  Please note; these movements have been executed effectively on the Matt Wenning Belt Squat machine and other models may differ in their versatility.

Set up on the machine in the normal way and place one foot behind you resting on something elevated, for example a flat weights bench.    Perform the movement in the standard way.  The machine provides stability throughout the exercise and helps to isolate the quads.  It also helps to stretch out the back hip flexors which is great to improve any back pain issues.

Stand with your toes on the very edge of the footplate and your upper body resting on the handlebar.  From there, simply raise up on to your toes as far as possible and then slowly lower your feet down to as low as they can go.  This is a great movement to hit your gastrocnemius muscles, the main muscle to the back of your lower leg.  It also keeps any stress away from your back.

Instead hooking up your belt squat belt on the centre eyelet, replace it with a stirrup handle.  Whilst resting one arm on the handlebar, grab the stirrup handle with the other.  Remain leaning over on your arm whilst pulling up the handle in a row movement.   This movement will recruit several muscles including rhomboids, latissimus dorsi, trapezis and biceps.

You’ll need a bit of assistance with this one.  As above, hook something like a pressdown bar onto the centre eyelet of the machine.  Place something such as a flat bench in front of the belt squat.  Lay down with your back flat against the bench.  Reach around and grab the pressdown bar with palms facing towards the ceiling, someone will need to release the handlebar of the machine enabling you to pull up as far as possible.  This is a fantastic movement to target your triceps.

ARE THERE DIFFERENT TYPES OF BELT SQUAT MACHINES?

There are two versions of the belt squat machine, both of which are plate loaded.  One makes use of a pivot system with the other using a cable system. 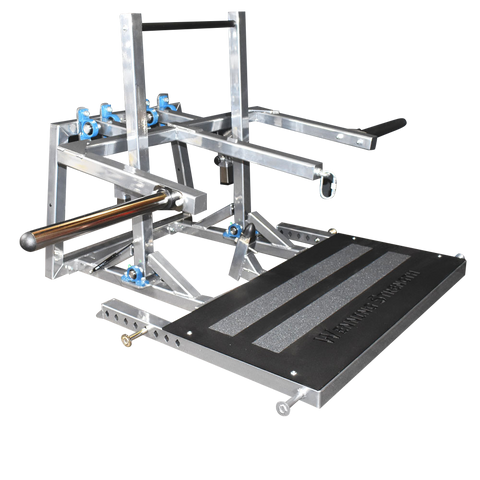 The pivot system variation is that as seen on the Matt Wenning belt squat machine.  This is a true version of a barbell squat.  By that, we mean it does not deviate from a what a regular barbell squat feels like or how it is executed.

The only difference is that there is no upper body stress.  Imagine taking a loaded bar from your upper back and moving it down to your hips.  The weight plates are equally distributed on either side of your body and kept at a distance that would replicate that of a bar squat. 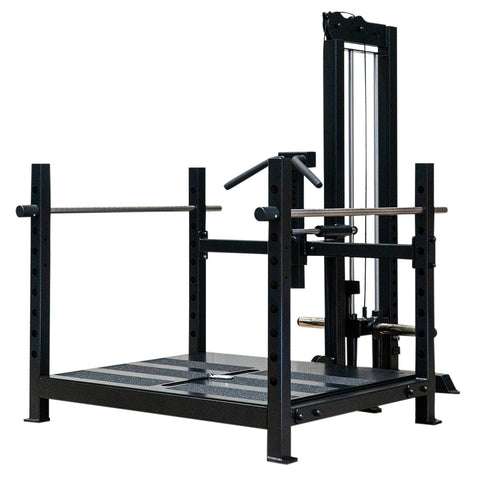 These are quite different from the pivot system in that the weight is loaded in front of you on a pin.  That weight has to travel along a cable and through multiple pulleys.  The major disadvantage of the cable system is that it creates drag.

A squat is meant to be an explosive movement whereby you slowly squat down and then power up and lock out your hips.  The cables impede this movement when powering up as they create a delay, this maybe slight but it has the downside of making the squat feel unnatural.

If your maximum squat weight is 100kg and you load this on, the cable system is going to take some of that weight meaning you’re going to need to load on more.  The downside to this is that you will not have a true representation of what you can actually squat.

If you want a belt squat that represents a true squat, then the pivot system is the best and most versatile machine.

CAN BELT SQUATS BE DONE WITHOUT A MACHINE?

Yes, belt squats can be done without a machine.  However, there are limitations.

A freestanding belt squat is undertaken simply by utilising a regular dipping belt with weight loaded directly onto the belt.   You need to be elevated from the floor in order that the weight does not hit the ground as you squat to depth.

You achieve this by having each foot on something such as a step-up box with sufficient gap in between the two boxes.

The main limitation to squatting this way is weight load.  In other words, you won’t have the option to squat much weight so this could be a good option for beginners or those that don’t have a need for squatting heavy.  The other issue is that freestanding squats are not always practical, setting up and dismounting with weight between your legs can be quite cumbersome.

WHAT ARE THE ALTERNATIVES TO A BELT SQUAT MACHINE?

If you don’t have access to a belt squat machine, there are other ways in which you can replicate the kind of movement.  Below are a few examples:

If your gym does not provide access to a belt squat machine they probably will have a landmine attachment.  Place a barbell into the landmine and add the required amount of weight.  Stand astride the barbell with the weight in front of you.  Hook the barbell to a dipping belt, this will keep the weight suspended from your hips whilst keeping it off of your back.  Perform squats in the normal.  If you want to increase the clearance to squat lower than simply elevate yourself by placing a plate under each foot.

This is another good one for those who do not have access to a belt squat machine but can access cable stations.  Wearing a dipping belt, attach this to a low cable.  Walk back around 10 feet or so.  From there simply undertake the squat movement as normal.  Increase or decrease the weight as required.

Whilst these won’t offer the same benefits as belt squatting, they are a good alternative to barbell squats if you don’t squat large amounts of weight.

This movement also works your stabilisation muscles.  It’s important to note that you won’t be keeping the weight off of your back during goblet squats but as it’s unlikely you’ll be lifting an excessive amount of weight this shouldn’t be too much of an issue.

ARE BELT SQUATS WORTH IT?

As we’ve demonstrated above, incorporating belt squatting into your leg routine is crucial for leg development, especially when you are suffering from any upper body injuries that otherwise wouldn’t allow you to squat at all.

Because you are removing your stabilisation muscles and spine from the equation, belt squatting also allows for a much fast recovery time meaning you can squat more often for quicker gains.

Whether you undertake freestanding belt squats or by using a machine, it’s a sure fire way of improving leg strength and muscle mass so they are absolutely worth the effort.

Newer What Are Fractional Plates And Why Should You Use Them?
Back to list
Older 9 Things To Consider When Buying A Gym Bench