Military Dumbbell Press: Why, How & Tips For Great Form

Working out to develop the upper body muscles is the best way to improve your overall health.  Not only in terms of increased muscle mass, which is good for bone density, but a strong upper body improves flexibility and helps you to perform everyday activities such as lifting and carrying, whether that be shopping or even the kids!

In this article we will discuss a specific upper body exercise known as the military press, explaining what the movement is, the benefits of doing it and how to execute it safely. If you would rather read about the different types of shoulder press exercises this resource would be better for you

The military press, also known as an overhead press, is a compound exercise that targets the upper body muscles with most emphasis on the shoulders.  It can be undertaken using either a barbell or dumbbells and requires strict form with some recruitment of the core muscles but with no leg drive.

WHAT MUSCLES DOES THE MILITARY PRESS WORK

Whilst considered a shoulder exercise, the military press also works the triceps, upper chest and lats.  During the movement, your core muscles are also engaged to help provide stability meaning that it’s a good exercise for stabilisation muscles.

As a general rule, when executing the military press you will be going for a higher rep range with less weight.  This will help to exhaust the muscles, encouraging growth and strength gains and improving endurance.

Furthermore, recovery time with this method of training will be quicker meaning you can do them more often.  It’s not uncommon for competitive powerlifters to incorporate these into their training two or three times per week in the run up to a competition.

WHAT IS THE DIFFERENCE BETWEEN A MILITARY PRESS AND SHOULDER PRESS

The military press is typically seen as more difficult to execute than a shoulder press due to less leg activation.  When someone undertakes the shoulder press they will use a degree of leg strength to help them power up the weight.  However, leg strength is not used during the military press and instead a significant amount of core strength comes into play to aid with stabilisation. This is the reason that most can usually press more with a shoulder press as they are using more muscles to help shift the weight.

The traditional way to undertake the military press is to stand upright with heels together and toes slightly pointing outwards.  Essentially a military stance, hence its name.  Holding this position is the reason why there is a significant amount of core activation to help you maintain your stance during the exercise.

This stance is different to a shoulder press, where the athlete would typically stand with feet around shoulder width apart or wider.  During the movement, there is a degree of bending at the knees so that you can power back up using the legs.  This momentum is what helps you to press more weight. 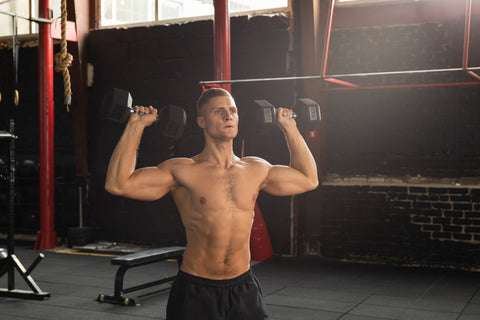 HOW TO DO THE MILITARY PRESS EXERCISE

Below we offer guidance on how to do the military press with dumbbells.  However, if doing this with a barbell you would start with the bar positioned on a power rack or squat rack.  After you’ve un-racked the bar, hold it to chest height before commencing with the exercise.  When pressing with a barbell, aim to your shoulders, wrists and forearms in a straight line.  This helps to keep the weight on the shoulders and triceps.

During the military press there should be no leg activation so, to get the most benefit from this exercise always aim to do it standing upright.  It has been said that you could do it seated.  However, when your shoulders and arms start to become fatigued it is likely you will begin to push through your heels if seated.  What’s more, you may begin to arch the lower back thus put some of the weight onto your upper chest muscles.  This is somewhat counterproductive to the exercise.

STEPS TO DO THE MILITARY DUMBBELL PRESS

TIPS AND HOW TO AVOID COMMON MISTAKES WITH THE MILITARY PRESS

Common mistakes seen with the overhead press include the following:

Be sure to keep the hands at a distance just beyond shoulder width apart, this allows for the arms to remain in a straight line when pushing up above your head.

Before pressing up, take a deep breath in.  This will help you to maintain a solid core throughout the movement and help with stability.  A strong, engaged core will also help to prevent any leaning back at the top of the exercise.  This should be avoided as not only does it reduce weight on the rear deltoids and place it onto the upper chest, it will put a significant amount of pressure on the lumbar spine which can cause a lower back injury.

This mistake can be a direct cause of the poor core control.  However, even when stabilisation muscles are engaged it is not uncommon to lean back during the exercise, and this will throw off the angle of the bar or dumbbells.  It’s usually done, as by leaning back more weight can be lifted but if you find yourself doing this reduce the weight load.  It is better reduce the weight and overhead press with good form.

It’s not uncommon to see people overhead press with a limited range of motion.  They either start with the barbell or dumbbells in the correct position at chest height but only partially press or; they begin by starting too high and press up to full extension.  To maximise benefits from the overhead press, start with the weight at chest height and press up until the arms are locked out.  If you are unable to do this, there could be mobility issues which need to be addressed.

It’s very important to maintain stability and control during the eccentric portion of the overhead press.  This is when you are lowering the weight back down to the starting position and is when you will be recruiting more muscle fibres.  The benefit of breaking down muscles during the negative part of an exercise is that it leads to greater muscle growth.

Bending at the knees to help push the weight up and overhead is a very common mistake seen with the military press.  The likely cause of this is due to a weight load which is too heavy to press using just the upper body. Momentum is then used to complete the repetition.  Even though the movement pattern is the same, the exercise is a push press instead of an overhead press.  That being said, engaging the legs could be useful if you have reached a plateau with the overhead press.  This will allow you to press more weight, building shoulder muscle and strength.  When you return back to doing the military press, you should be able to push beyond your previous weight limit.

The military press is a fantastic exercise to work the three muscles that form your shoulders (anterior, lateral and posterior) and also give the core a good workout.  It’s important to focus on form to help prevent injury and maximise the benefits of this exercise.

Newer Squats: How To Do Them And Why
Back to list
Older Unilateral Training: What Is It, Benefits and Examples