How To Master The Glute Ham Raise

WHAT IS A GLUTE HAM RAISE?

The Glute Ham Raise is a compound exercise which effectively targets the posterior chain muscles.  The muscles include the glutes, hamstrings, calves and those along the spine (as indicated in the image).  It’s also perfect for improving your stabilisation muscles, this is because you engage your core throughout this exercise.

The movement can be carried out either by using a glute ham raise machine (sometimes referred to as a glute ham developer) or by using a variety of accessory items to allow the exercise to be done on the floor.

It’s definitely one of the more difficult movements to execute but when done correctly it offers fantastic carry over to other compound exercises such as deadlifts and squats.  This is one of the reasons this movement is popular amongst powerlifters, who are always looking for ways to improve on their personal best. 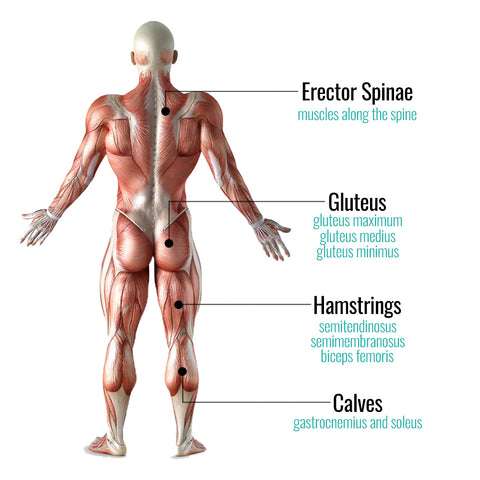 HOW CAN IT BE DONE WITHOUT A MACHINE?

As mentioned above there are a couple of ways of executing the glute ham raise exercise but, if you don’t have access to a glute ham raise developer / machine you may want to consider the following.

One of the most straightforward methods is to replicate the movement by kneeling on the floor, ideally on a gym mat for comfort.  You can either ask a spotter to help you or if you have access to a barbell and enough plates, this will work just as well.

If using a barbell, ensure the bar is located on the ground and anchor your feet underneath the bar.  It’s worth nothing that the load on the bar will need to be heavy.  This is to ensure that during movement, it stays in place.  Once secure, simply lower your upper body down to the ground keeping your body straight and spine neutral, aiming to get as low as possible to the floor.  For those new to this exercise, you’ll likely need to place your hands on the floor in order to push yourself back to the starting position, think of a press up.

If you’re using a spotter, the only difference is instead of the loaded bar holding you in place, the spotter will be doing this job for you.  This method is without doubt the closest you’ll get to a traditional glute ham raise without having to use a machine.

It’s also ideal for those who want to be able to workout at home as very little equipment is needed.

HOW TO USE A GLUTE HAM DEVELOPER

You may be wondering why there is a need to even use a glute ham developer if the exercise can be done easily enough without one.

The machine itself will offer a number of benefits you won’t get when doing a floor glute ham raise:

All the above show that the machine, when compared to undertaking the floor exercise, offers a safer and more stable platform with versatility thanks to the band pegs.  However, it’s worth pointing out that not all the machines will offer the option of pegs.

Now we’ve covered the benefits, lets talk more about how to actually use the machine to get a killer posterior chain workout.

Before undertaking this exercise, set up of the glute ham developer is key.  This will vary depending on the user.  Common mistakes can be having the knee pad too close to the foot rollers.  This will essentially mean that you’re ‘scrunched up’ making it virtually impossible to do the exercise.

Alternatively, placing the knee pad too far away from the footplate will reduce range of motion to the extent you will merely be performing a version of the back extension and not really hitting your posterior chain at all.

The great thing about this machine is that you can vary your range of motion depending on your ability.

WHAT IS THE DIFFERENCE BETWEEN THE GLUTE HAM RAISE AND BACK EXTENSION EXERCISE?

People can sometimes confuse the two as they would appear somewhat similar in the movements.  The important thing here that makes all the difference is where the pivot of the body happens, meaning different muscles groups are targeted.

Whilst the hamstrings come into play during both the glute ham raise and back extension, the extent of which differs.

During a back extension exercise, you will pivot at the hip joint with your knees locked out, targeting mainly the lower back and to a lesser degree, the hamstrings.

Whereas, during a glute ham raise you should be moving from your unlocked knee joints thereby isolating much more of your glutes and hamstrings and to a lesser degree, your lower back.

Remember, most of the tension during a glute ham raise should be felt throughout the glutes and hamstrings to know you are doing it correctly.

So, whilst the pattern of movement for both exercises looks very similar, those pivot points on the body make all the difference to the muscles targeted.

IS THERE AN ALTERNATIVE TO THE GLUTE HAM RAISE?

If you don’t feel 100% confident jumping into a glute ham raise but are looking for some suitable alternatives that target the same muscle groups, then consider the following:

These target the posterior chain very effectively and all you need is a barbell or a good morning machine.  All you need to do is start in a standing position with the barbell resting across your upper back / shoulders.

Holding on to the barbell, hinge at the hips pushing them back whilst bracing your core and keeping your spine neutral.  Once your upper body has reached a horizontal position, return back to the starting position.

This is a good one for doing at home as all you will need is a kettlebell.  The weight of which will be dependent on your ability.  Start standing up with the kettlebell on the ground in between your feet. Keep your feet around hip width apart.

With your knees slightly bent hinge at the hips (same as with the good morning exercise) and grab the kettlebell with both hands, pull up the kettlebell so its between your legs.   Starting gradually, start to swing the kettlebell out in front of you.  Doing this gradually will allow you to build momentum.  Keep your back straight at all time and push forward with your glutes and hamstrings engaged.  Think of locking out when doing a deadlift.

Another good one for either the home or in a gym.  Some gyms will have a dedicated hip thrust machine or bench.  If not, this can be done at home using a chair of a gym flat bench.  The hip thrust is a great exercise to target the glutes, hamstrings and lower back.  You’ll also be using your core muscles for stabilisation.

Start with your upper back resting on a flat bench.  Keeping your knees bent make sure your feet remain flat on the floor.  Slowly raise your hips from the ground until your body is horizontal to the floor.  Squeeze your glutes at the top of the movement.  Slowly drop back down and repeat the exercise.

To increase the difficulty place a weight across your hips, this would ideally be a barbell.  As the exercise becomes easier you can start to add a couple of plates to increase the resistance.

Whilst the above exercises won’t offer the same level of difficulty as a glute ham raise, they’re certainly a good starting point before you move over to the more difficult exercise.

The glute ham raise is often an overlooked exercise simply down to it being one of the more difficult.  However, when done correctly and regularly you’ll reap the huge benefits especially if you are a powerlifter looking to improve upon your personal best or an athlete whose sports requires explosive movements, i.e. sprinting.

Create an Account
Sidebar
Start typing to see products you are looking for.